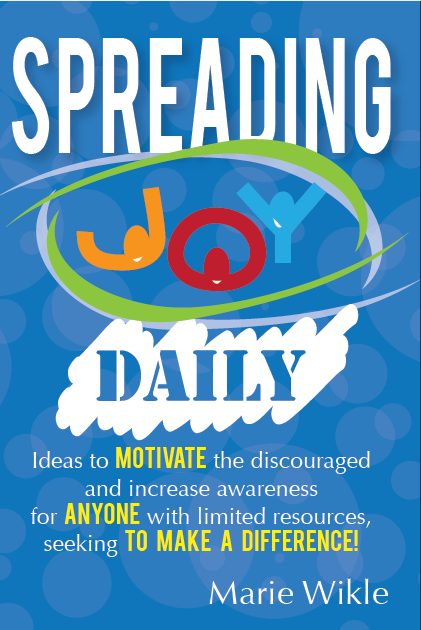 A few months ago, I got an email from the Spreading JOY Daily Team.  The email asked if I was interested in spreading the word of Spreading JOY through my blog.  I was honored!!

A few weeks later, I received two copies of Spreading Joy Daily by Marie Wikle.  I read the book in two sittings.  The book gives 365 ideas for ways to spread joy.  It is genius.  Some ideas are free and others involve an expense.  But, none of the expenses are too much that you couldn't swing them every once in a while.

I truly believe in the movement of spreading joy.  Our culture is not the most positive and encouraging.  Someone who intentionally looks for opportunities to spread joy through encouraging words (written and verbal), gifts and actions can change the outcome of someone's day!  Just give it a try!!

I would love to share a few of my favorite ideas with you...
- Written Words Are Powerful... This is free!  Just write a card to five people that you encounter during your day!
- Cheesecake, Glorious Cheesecake... Purchase a cheesecake and give it to a neighbor!!
- Big Grins... This is free!  Just flash your pearly whites at everyone you encounter and see what difference it makes for you and those you encounter!
- Kids that Knock and Ask... Get... How many times has a kid selling Girl Scout cookies or popcorn knocked on your door, and you just said "no thanks?"  Can you only imagine how many times the door has been shut in their face?  Just buy a box of cookies the next time someone knocks on your door!
- That Was Awesome... This is free!  Just make eye contact and give a sincere thank you to someone who does a good job, or is wearing an outfit that you like!
- Tips Bring Smiles... Slip a $5.00 tip to the bus boy!  Can you imagine the sheer joy it bring the bus boy to be noticed!

That is only a brief preview!  You'll have to enter the giveaway to get your hands on the copy... Or, you can purchase the book at Amazon, Barnes & Noble, and Books-A-Million!

Please take some time to explore the Spreading JOY Daily website.  There are ideas on how to spread joy without spending a penny, resources, more books and more!  You can send a stamped envelope to their address, and for FREE they will send you free Spreading JOY cards, for when you are inspired to purchase the meal of someone behind you!

To be entered into the giveaway...
- Post a comment below by June 27th. In your comment, let me know your name and what you are most looking forward to in the Spreading JOY organization!
- On June 30th, I will announce the winner!!
Posted by Keirstin at 6:00 AM 3 comments:
Email ThisBlogThis!Share to TwitterShare to FacebookShare to Pinterest

So, I have a confession or two... I am extremely competitive.  I, also, lack follow throw.  I will come up with some great plan, but if I am doing it on my own, I will not follow through to completion.  It's terrible.

A few years ago, I participated in a 80 day fitness challenge.  It was intense.  No sugar, no soda, 80 ounces of water every day, 7 hours of sleep 3 times a week, exercise 6 times a week, 5 (I think) servings of fruits and vegetables every day... and, I feel like I am forgetting a thing or two.  But, because I was competing, the follow through was a breeze.  I came out on top!

I've needed to get my health back in order for far longer than I'd like to admit.  I just can't ever seem to follow through on my own.  It's too easy for me to talk myself into a midnight snack, a bowl of ice cream, a quick run to Sonic...

All that to say, I recently decided that my health could no longer be put on the back burner.  It is time to get serious!  But, knowing my weaknesses, I knew I could not do this alone.  So, I drug my roommate into a fitness competition.  But, what happened from there is like nothing I would have expected.

I put a little blurb on facebook about doing a fitness/health challenge and anyone interested could join.  Over the course of a week and a half, over 20 women from five different states have joined.  Today, we will begin "Get Fit Summer 2014" Or, #GF2K14 for short! 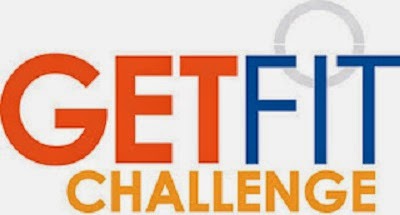 So, here is how the eight week challenge works.  Everyone will be paired with someone who lives in their state.  Points will be rewarded for contacting the partner, drinking 64 ounces of water, not eating after 9 pm, eating 2 servings of fruit, eating 3 servings of vegetables, not eating sweets, keeping a food journal, exercising for 30-45 minutes, getting 7 hours of sleep, and not getting fast food.  Weight loss points are also rewarded at the end of each week.  At the end of the competition, everyone (in each state) will get together to celebrate their accomplishments.  The pair within that state that earned the most points will not have to pay for their meal, and everyone else will equally chip into the winning pairs meal.

I can't take all the credit for this.  I adapted the idea from Six Sisters Stuff - 8 Week Weight Loss.  They have a free document to download.  I just added a few things to best fit the needs of our group.  So, thank you to the Six Sisters for sharing your creation for free!

I am inviting you to join me on our journey over the next eight weeks.  It is going to be quite a ride.  I will share every Monday a re-cap of our week!  So, come along!  And, if inspired, jump on in with us!
Posted by Keirstin at 6:00 AM No comments:
Email ThisBlogThis!Share to TwitterShare to FacebookShare to Pinterest
Labels: Get Fit 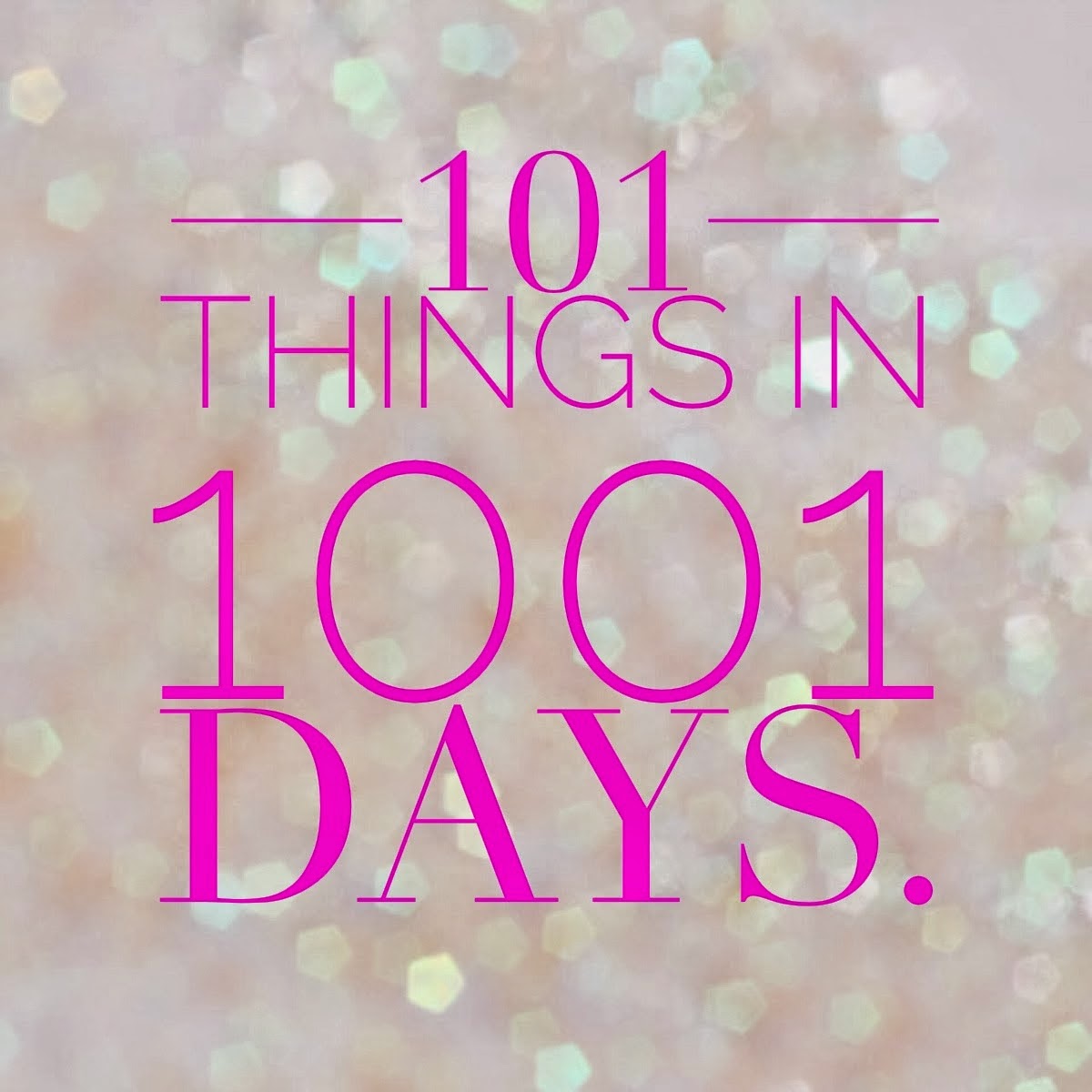 April 23, 2013... I was at work.  I happened to be making dinner for the family I nanny-ed for.  I checked my email real quick.  I had an email from Southwestern Baptist Theological Seminary.  Southwestern Baptist Theological Seminary was emailing to congratulate me on my acceptance.  I remember being overwhelmed with emotion.  I screamed on the inside.  I sent a mass text to a group of friends.  And, then I was overwhelmed with fear.  This dream that God had placed inside of me was becoming a reality.

If you've been around .Redeemed. for a while, you know the story of God calling me to SWBTS, me telling God no, God persisting, me applying, me getting accepted and me moving halfway across the country to start a new adventure.  Not new to .Redeemed., well... God called me to SWBTS in November 2012, I told God "there's no way", God told me "there's a way", I applied, I was accepted on April 23, 2013, and I moved halfway across the country in July 20, 2013.

So, it has been a year since I was accepted to Southwestern Baptist Theological Seminary.  What a year it has been.  I would like to replay the last year for you.

So, I was accepted to SWBTS on April 23, 2013.  In May, I went to dinner with my parents.  They thought I was taking them out to tell them that I had a boyfriend.  Instead, I told them that I was moving to Fort Worth, Texas.  Also, in May, after being unable to put it off any longer, I told my boss that I was moving for graduate school.  Everyone was so happy for me.  It was so reassuring to have so many people supporting what God was doing in my life.

June was quite a month.  For the sake of consistency for the children I was nanny-ing, they got a new nanny.  Fear of being jobless overcame me, but the Lord provided.  I began working for my parents, and picked up many babysitting and housesitting jobs.  I received an email from SWBTS with my name on it in June.  At the end of June, I moved out of my home for a year and a half and couch surfed for the month of July.

July was filled with emotion.  It was in July that I would pack up a moving truck and travel halfway across the country to start a new adventure.  I would be leaving behind friends and family to chase after a dream of mine.  This was exciting, but terrifying.  I spent a lot of time with family and friends.  And, on July 20th, we set out for a three day adventure to Texas.

I was homesick, lost and lonely the majority of August and September.  The roommate situation wasn't fabulous, I had no friends, and I wasn't going to a church within the SBC *gasp*.  I wasn't finding my place in Fort Worth, Texas.

Things got better in October.  I was finding my place, making friends, embracing the place God had called me to and standing my ground... even when it wasn't in line with the Southern Baptist Way.

I got to fly home in November for Thanksgiving.  I am not one to cry in public.  But, after a not so grand flight experience... and being away from my family for far too long, I balled like a baby when I saw my brother at the airport at midnight in Augusta.  It was grand to share a midnight snack with him in the ghetto of Aiken at Waffle House.  It was absolutely wonderful to see my grandma, and my mom and dad, and baby brother.  Being back home with family for Thanksgiving was perfect.  Because my birthday is a week after Thanksgiving, we celebrated my 24th birthday a few days early.

December flew by with exams, a family Christmas cruise, catching with friends and sleeping the days away.  Before I knew it, my five week break in Charlotte was up, and it was time to fly back to school.

January brought all sorts of transition.  When I arrived back in Fort Worth, I finally got to see my fabulous new apartment with my fabulous new roommate.  Thanks to wonderful friends, all of my furniture was already in our apartment.  The next day, I began my second semester at SWBTS, enrolled in thirteen hours, like a crazy person.  January, also, came packaged with an interview or two.  One door was closed because...

February brought a dream job!!!  After four years of praying for a position in ministry, God so eloquently placed the opportunity in my hands.

March was a month of stretching.  Stretching of my time.  Stretching of my faith.  I had to remind myself that I am who God says I am.  I am qualified because God has called me.  I may not be your cookie cutter Christian seminary student, but I am a child of God who has a unique call from her Heavenly Father.
Posted by Keirstin at 6:00 AM No comments:
Email ThisBlogThis!Share to TwitterShare to FacebookShare to Pinterest
Labels: About Me, Personal Reflection

On Monday, I shared with you how Pastor Craig Groeschel challenged the men and women of his church to pick one verse and one word to guide their decisions, actions and thoughts throughout 2014.  I shared with you that my verse for 2014 is James 4:13-15 and my word is present.

When I first decided that present was my one word, I realized that it is kind of vague.  What does it mean to be present anyway? 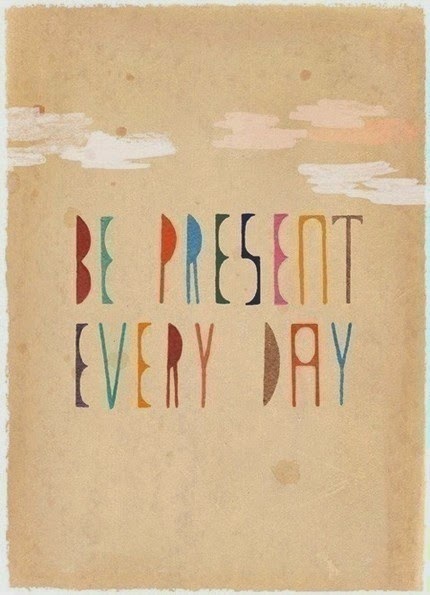 
To me, being present means...

- Turning the phone on silent and facing it upside down or out of sight when with friends.
- Not worrying about the mile long to do list that tomorrow brings.
- Not dwelling on all that I should have done yesterday.
- Not being on social media when I have carved out time for homework or work.
Ultimately, being present is focusing on what is here and now, no matter what has happened or what is to come. 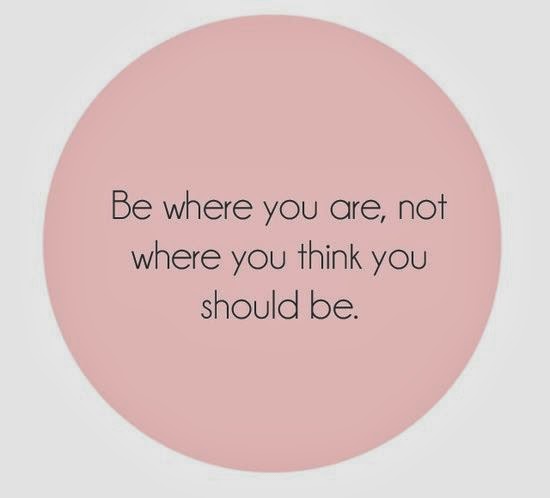